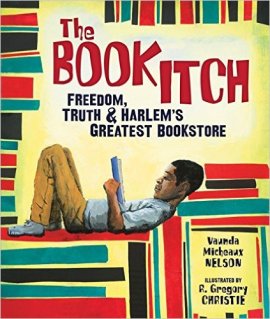 Most people miss the value of people, places or things in which they see little connection to their lives.  For example, I did not know there was a Grandparents Day until time and circumstance forced me to become one. It is funny how many great things escape our notice. In that same way, award-winning author Vaunda Micheaux Nelson admits she did not realize the beauty or importance of her great uncle’s life’s work, until after he died. Yet, the light came on for her, as readers will see in the soon-to-be released nonfiction tale, The Book Itch. The writer captures an important American story about a die-hard book lover, as well as a time, place and people of which most people in the United States today missed.

The 32-page text is a simply written tribute to the importance of words, and a man who found his way to freedom and success through their embrace. Lewis Henri Michaux, the main character, is indeed an unusual figure in his devotion. The man was an evangelist for the power of the written word, because he understood the ability to read and grasp ideas was the essence of education. That fact is clearly shown in the sayings he shouted as he literally hawked titles in New York City’s Harlem, such as, “Don’t get took. Read a book,” or  “Knowledge is power. You need it every hour. Read a book.”

Those attracted to the book for a biography of a once important African American will not be disappointed. The author shares Michaux’s story in several ways. Although, the narrator is the fictional voice of her cousin, Lewis Michaux, Jr., the facts are there. At the same time, book also builds on her great uncle’s slogans to create a tableau that cleverly imparts a strong message that books are cool, even outside of school. “You are not necessarily a fool because you didn’t go to school,” was one of his father’s fondest mottoes.

Lewis Michaux had not much more than a “sharecropper’s education,” which meant the main thing black youth in his time were taught was how to work in the fields. The bookseller, who died in 1976, was born in Newport News, Virginia, during the last decades of the 19th Century, a time when it was hard for poor African Americans to go to schools. Their school years were often held captive by the needs of the harvest. They would attend classes until the season came for them to pick the crops.

Michaux rejected that fate. He fell into a life of crime as young man, yet redeemed himself, and eventually discovered a passion for words that led him to become an apostle that spread a “knowledge is power” gospel. As mentioned, when his book business began around 1932, he walked the streets with a cart and shouted lines like, “Don’t get took. Read a book.” Ultimately, the message and those efforts grew into Harlem’s African National Memorial Bookstore, a nexus for learning and free speech.

The store near 125th Street and Seventh Avenue was a magnet for readers of all ages, as well as writers, artists, musicians, scholars, and politicians, that included celebrities as diverse as boxing legend Muhammad Ali, the late trumpeter Louis Armstrong, the late Ghanaian President Kwame Nkrumah, the late authors James Baldwin and Langston Hughes, and civil rights leader Malcolm X. The Book Itch with its vibrant drawings by R. Gregory Christie will delight readers, even in kindergarten, as a read-aloud tale. There were times when the design and layout made the work a little hard to follow for novice readers, yet experienced readers even into middle school will be drawn to the tale’s style and message.

The takeaway from The Book Itch for many readers is a sense of empowerment. They will see in Vaunda Micheaux Nelson’s nicely knit tale, that an individual can yield real power over his or her future, and knowledge fuels that potential.

I am a storyteller, author, editor, blogger, and retired university professor of Creative Writing. Now in Central Florida, I still teach every now and then, but write most of the time. Most recently, I poetry was featured in Mo Joe The Anthology. My last book, 10 Stories Down, a poetry collection published in September 2011, is inspired by several long-term stays in Beijing. Life and Other Things I Know: Poems, Essays and Short Stories (Elephant Eye Press, 1999), was the first. Throughout the years, the list expanded to include: African American Children's Stories: A Treasury of Tradition and Pride, Grandma Loves You: My First Treasury, African American Stories: My First Treasury, Like A Dry Land: A Soul's Journey through the Middle East and contributions to Take Two, They're Small, an anthology of poems, memoir, essay and fiction on food. My poetry, fiction and essays have also appeared in Yellow Medicine Review, Washington Living, Upstate New Yorker, The Southern Quarterly, Reporter Magazine, Drylongso, Fyah, MentalSatin, Pinnacle Hill Review, Invisible Universe, Bridges, Ishmael Reed's Konch Magazine, New Verse News, and UpandComing Magazine. View all posts by VGwrites